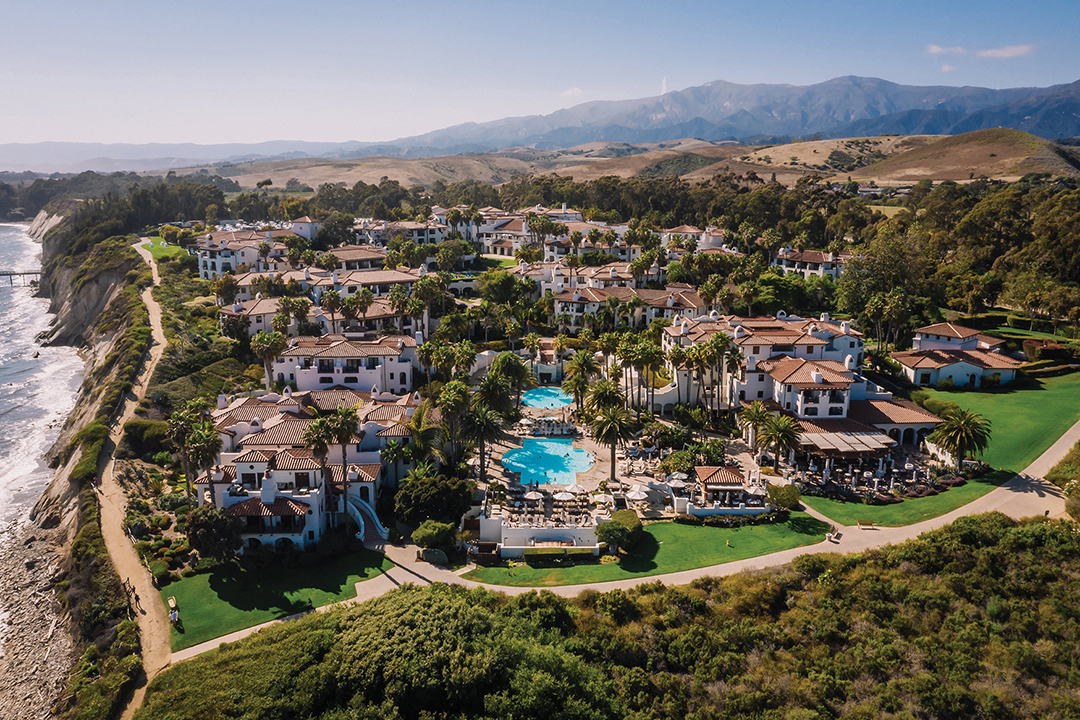 Since the pandemic began, my husband, Dwight, and I haven’t ventured far from home. But by late February, we had both received COVID-19 vaccines, and the pace of the rollout gave us confidence to explore California a bit farther afield. We settled on Santa Barbara, billed as “The American Riviera” because of its beautiful coastal setting. Explorer Juan Cabrillo gave Santa Barbara its name during his voyage up the California coast in 1542, but it was settled long before that by the Chumash Indians. Later, Franciscan monks built 21 missions in California including Old Mission Santa Barbara, called the “Queen of the Missions.”

After reviewing safety and sanitation protocols, we booked a five-day getaway that began at The Ritz-Carlton Bacara, Santa Barbara and ended at the Hotel Californian (where I had purchased a stay in a charity auction). These stunning properties offered distinctly different experiences: Bacara is an expansive, family-friendly resort overlooking the coast while the Hotel Californian is a sophisticated property in town within walking distance to the waterfront and the lively Funk Zone — home to art galleries, restaurants, tasting rooms, and shops. During our stay, we had lunch and a tour of Montecito’s exclusive San Ysidro Ranch, where John F. Kennedy and Jacqueline Kennedy spent their honeymoon, and where Winston Churchill worked on his memoir. The guest list is now closely guarded, but suffice it to say that Hollywood celebrities, professional athletes, and moguls have stayed here — and many return year after year.

The drive from San Diego can take five hours or more, depending on traffic, but Amtrak is another option, and Alaska Airlines will debut daily flights from Lindbergh Field on June 17. We opted for the drive up the coast and headed straight for Santa Barbara’s La Super-Rica, a modest, cash-only taqueria favored by both the late Julia Child, the celebrated cooking teacher and author who once lived in Montecito, and native Katy Perry, who gave the restaurant a shout out in her song, “This Is How We Do.” Lucky for us, the line was only eight deep; on weekends, it can stretch for a block. While we waited our turn for homemade tortillas and the “Super-Rica Especial” of roasted chili pasilla and marinated pork, we talked with a longtime local who recommended “must-dos” around town and shared her own local celebrity sighting: Oprah Winfrey, once seen shopping in the plumbing store across the street.

Once sated, we set out for the The Ritz-Carlton Bacara, a sprawling, 78-acre property along a two-mile stretch of beach about 20 minutes away in Goleta. The resort offers two-story villas surrounded by lush landscaping, three infinity-edge heated pools with private cabanas, a 42,000-square-foot spa, fitness center, tennis courts, and a championship golf course next door. Even though the resort is expansive, Bacara’s Senior Marketing Manager Derek Kokinda says, “Planning is key. You need a reservation for everything.” That includes booking pool and fitness center time in advance as well as restaurants because of state mandates that limit capacity and require social distancing. Chaise lounges, for example, are spaced six feet apart and masks are required in public spaces

Bacara has five restaurants including the well-regarded Angel Oak helmed by Chef Efe Onoglu, offering dining indoors and out with coastal views. The restaurant, a modern steakhouse, has the best tuna tartare I’ve ever tasted, top quality Kobe beef, local halibut and abalone, and imaginative twists on traditional sides. We had breakfast and lunch on the casual Bistro patio, and drinks and appetizers on the O Bar & Kitchen’s oceanview terrace warmed by fire tables. Centerpiece of the O Bar is a bar shaped like an “O,” which means “water” in the language of the Chumash Indians who had a deep respect for the ocean on which they heavily relied. Off property, we savored such classics as chicken piccata and beef bourguignon at the nearby Jane at the Marketplace, offering American bistro fare with European influences.

We enjoyed walking the wildflower-lined paths to the beach, as well as a guided hike with Meghan Leon, a naturalist and graduate of the nearby University of California Santa Barbara. She showed us local flora, including the blue blooms of the black sage, which the Chumash used to brew into tea, and California sagebrush, called “cowboy cologne” because ranch hands used it to freshen up after a hard day’s work. Leon also pointed out Bird Island just offshore, a former oil pier rebuilt as a habitat for brown pelicans and cormorants. Although there is no longer oil drilling by the resort, a platform, lit up at night like a Christmas tree, is now home to coral and fish. ritzcarlton.com

Guests can drive to Elwood Mesa and hike the bluffs overlooking the ocean or explore the Zen-like Labyrinth Trail on UCSB’s Lagoon Island. While Bacara offers wine tastings on property through the Foley Food & Wine Society, we decided to spend a half a day in the Santa Ynez wine country with a private tasting and tour (available by appointment) at Pence Vineyards & Winery in Santa Rita Hills, founded by developer Blair Pence, who cultivated a taste for California cabernets (“between shots of whiskey and beer”) at the University of Southern California’s Delta Tau Delta fraternity house. The 200-acre working ranch and farm includes 38 acres of organically grown chardonnay, pinot noir, Gamay, and syrah. Pence produces complex, premium wines due to the vineyard’s varied terrain, soil complexity, and climate. The winery offers several lovely tasting areas including a gazebo overlooking a pond. Dwight and I had an intimate tasting for two, but you can also book appointments for larger groups and special events. pencevineyards.com

Our next stay was in Downtown Santa Barbara at the stunning Hotel Californian just a few blocks from the main beach and the historic Stearns Wharf. When it opened in 2017, the hotel’s take on Spanish Colonial Revival architecture with modern Moorish-themed interiors caused quite a splash. Celebrity designer Martyn Lawrence Bullard, whose style was once described as “Hollywood glamour meets ethnic exotica” combined bold, black-and-white patterns with Moroccan motifs, adding such fixtures as gilded snake sconces. The hotel encompasses four buildings with 121 guestrooms offering views of the sea, city, and Santa Ynez mountains. The California Building has a rooftop deck with a swimming pool, hot tub, and plenty of space for lounging or sipping sunset cocktails while drinking in the dazzling 360-degree views. The building also houses a Moroccan-inspired spa, salon, and fitness center.

The hotel’s Blackbird restaurant serves Mediterranean and contemporary American cuisine in a sophisticated space, and we enjoyed a lovely alfresco dinner at the hotel’s casual Goat Tree café: steak with tarragon aioli and Moroccan spiced frites, and orecchiette tossed with sundried tomato, Italian sausage, broccoli rabe, and pine nut relish. The hotel is in The Funk Zone, and while no one knows exactly how the neighborhood got its name, it may have stemmed from the fish processing plants and warehouses that were once located there. They have since given way to art galleries and artists’ studios, shops, wine and craft beer tasting rooms, and such restaurants as The Lark, a hip urban eatery housed in a former fish market. Also recommended: Loquita for Spanish tapas and Lucky Penny’s wood-fired pizzas. We shared a bucket of steaming mussels and garlic bread at Bluewater Grill, clam chowder and oysters on the deck at Brophy Bros. on the historic Stearns Wharf, and barbecue at La Paloma Café, which celebrates the cuisine of the Californios, early settlers who were influenced by the flavors of Spain and Mexico. hotelcalifornian.com

The café is located in the historic Presidio neighborhood, so named because it is centered around the site of the last of the Spanish fortresses — presidios — built in California. Here there are shops, museums, and wine tasting rooms. We swirled and sipped wines from the Grassini Family Vineyard and other wineries in the charming El Paseo Center Courtyard. Later we stopped in at Carr, a small handcrafted winery in Midtown owned by Ryan Carr, who sources grapes from vineyards he operates to ensure quality. He co-founded the Santa Barbara Urban Wine Trail, now with 30 member wineries around the county. (Buy a pass online or at wineries for free tastings and discounts on purchases.)

Another highlight was sailing along the beautiful Santa Barbara coastline. We boarded The Double Dolphin, a 50-foot catamaran, at the Santa Barbara Sailing Center for a two-hour whale watching excursion. We saw sleek seals scrambling aboard buoys, but no gray whales heading north with their calves after giving birth in warm Mexican waters. But the sparkling views of the coastline, with the Santa Ynez Mountains as a backdrop, were well worth the trip. You can also rent boats and gear for stand-up paddle boarding, or pedal bicycles along the beach on palm-tree lined paths.

On the last leg of our trip, we visited Montecito, a wealthy but understated enclave of multimillion-dollar estates where celebrities like Prince Harry and Meghan Markle now reside. In the morning, locals line up for hot cups of coffee and homemade bread and pastries at Bree’osh Bakery on Coast Village Road. Browse boutiques that include Angel and Allora for women’s clothing and Maison K for home goods. Insiders also recommend Lucky’s steakhouse, oceanfront dining at Caruso’s at the Rosewood Miramar hotel, and Tre Lune for Italian specialties. Its bustling dining room, hung with black-and-white photos of celebrities, also has miniature chairs attached to the walls labeled with the names of “regulars.” Explains an insider: “It means you’ll always have a seat here.”

At the 550-acre San Ysidro Ranch, tucked into the foothills of the Santa Ynez Mountains, we toured the grounds, rose gardens, and groves with General Manager Ian Williams, who related the history of this 100-year-old hideaway, once a citrus farm tended by Franciscan friars and now a Forbes Five-Star resort. The property was damaged by mudslides in 2018, triggered by heavy rains after the disastrous Thomas Fire burned the surrounding hillsides. It reopened two years ago after extensive renovations.

Dine at The Stonehouse, a 19th century citrus packing house, on the oceanview terrace warmed by a stone fireplace beneath twinkling lights, or on the garden patio surrounded by loquat trees with creekside views. There is also limited seating at Plow & Angel, a cozy tavern. Franco de Bartolo, director of restaurants, says Stonehouse favorites are tableside flambé, from steak Diane to such classic desserts as cherries jubilee, bananas foster, and crêpes Suzette.

The celebrated cellar, a winner of the prestigious Wine Spectator Grand Award since 2014, has rebounded after mudslides destroyed 12,000 bottles, valued at $3 million, some dating back to World War I. De Bartolo redesigned the cellar, and its stellar collection of more than 2,000 labels has since been restored.

Fortunately, the mudslides did not destroy the Old Adobe, the oldest structure on the property, dating to 1825. A boulder to the left of the building diverted the mud flow, sparing this California historic landmark, now a rustic setting for intimate dinners and gatherings.

The resort has 38 cottages, decorated with fine antiques and artwork, each with its own outdoor Jacuzzi and rain shower. Stay at the Kennedy Cottage, where Jackie and JFK spent their honeymoon, or book the two-bedroom Ty Warner Cottage with its own swimming pool. The cottage is named after the resort’s owner, a billionaire businessman and creator of Beanie Babies who also has a string of high-end hotels.

At San Ysidro Ranch, guests can enjoy sunrise yoga, horseback riding, hiking along 17 miles of trails, a dip in the secluded hilltop pool, spa treatments, or simply relaxing in the rose garden to the sounds of a flamenco guitar. It is little wonder that guests cannot wait to return to the ranch overlooking The American Riviera. sanysidroranch.com, santabarbaraca.com