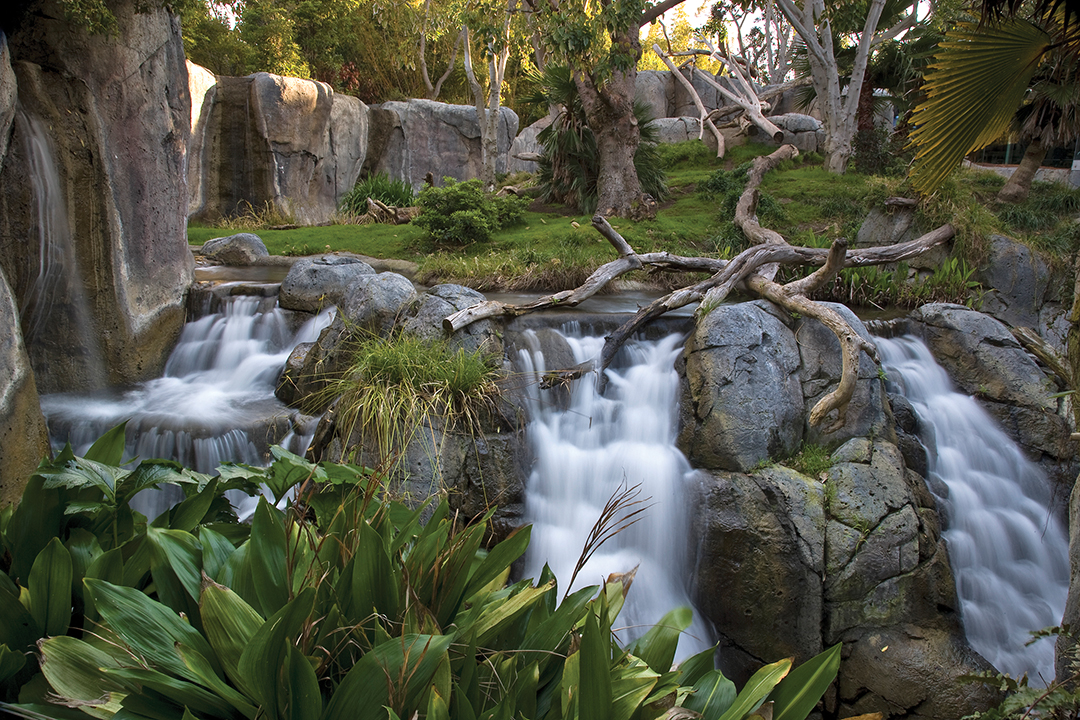 As the San Diego Zoo’s director of horticulture, what Adam Graves is directly charged with protecting, preserving, and propagating doesn’t have silky fur, or doe eyes, or brilliant feathers. But his critical work with the Zoo’s botanical collections, managing its landscape, and producing food for its animals (ten tons of green material per week!) is as important as the care and conservation of the vast array of animals for which this venerable global organization is known. Without it, the Zoo simply wouldn’t exist as we know it.

“I’d consider us very, very lucky,” says Graves of his horticultural team at the Zoo. “I love plants, obviously — that’s why I do what I do — but I get to come to work with 43 other people who are equally passionate about it.” He says the Zoo’s collection that’s entrusted to them includes an astounding 20,000 accessioned plants that are tracked and tagged. “A lot of other zoos just can’t match that, and not for lack of effort, but we just happen to be extremely fortunate that we are who we are and we’re able to do the work that we do, so I’m really proud of our team and I think that what we have would rival most botanic gardens — not just zoos, but botanic gardens in general.”

What might not be so obvious to the average Zoo visitor, beyond the tremendous collection of plants that Graves cares for as part of the Zoo’s conservation initiatives, or the trees, shrubs, and flowerings plants that beautify the lush park, is the sheer volume of food, or “browse,” that his team produces for the animals. “When you think about it, we’re feeding a wide variety of animals, and it’s everything from ants to elephants,” he says. “And you think about how much an elephant eats — we’re not supplying at 100 percent browse, but they can eat literally an entire pickup truck a day.” Of his team, nine people’s sole responsibility is to produce food on approximately 35 acres both on-property and in third party areas beyond the Zoo and Safari Park. They generate essential foods that comprise the entire diet for certain animals within the collection that they would otherwise be unable to keep — eucalyptus for koalas, for example — while also growing fresh, healthy additions to what’s on the menu.

“The reason we do that is not just to be nice to the animals, although that’s a big part of it, but we work really closely with the nutrition department and the wildlife care team to make sure that the animals that need browse most urgently are those that are getting it,” says Graves. “There are a lot of other animals that could eat pellet, [or] they could have hay, but we’ve found that, as a conservation strategy, for the health, welfare, and mental well-being of a lot of these animals, especially primates and hoof stock, they benefit from having fresh green material. It’s just like humans: We know we should be eating salads, whether we are or not, but it’s going to be the best thing for us, and so we’ve found that’s been really effective. Especially with giant elands, giraffes, and some of our other primates, that’s a real pillar of our wildlife nutrition strategy.”

It goes without saying, then, that the entire food production element is done completely pesticide-free. However, Graves says, there are times when it becomes a necessity in other areas, but the Zoo’s approach is a measured, informed, and collaborative one. He is but one member of a task force that was created to evaluate when and how to use pesticides, a chemical environmental management group. “In our conversations with the entomology department, the bird department, the veterinarians, we’re able to first of all be very targeted in our application so we know that we’re applying the right pesticide to the right plant, at the right time, and we’re also able to roll out some mitigation strategies,” he explains. “So, once we’ve applied the pesticide, we can take all the fruit and flowers off that plant so that hummingbirds and other natural pollinators are not going to be affected by it. We can remove all of the surrounding plants so that if there’s any spillover, it’s not going to be affecting anything in the native habitat. We’ll do it at certain times of year so that birds that are roosting in the tree won’t be exposed to it so it doesn’t have effects on thinning of their shells. That’s the benefit of having all of these experts in a multi-disciplinary organization — we’re able to talk to each other, we’re able to really hash this out and find a way that we can do what we want to do and protect the species that we want to protect and minimize the effect on everything else in the landscape. And so far, it’s been pretty effective.”

Though he admits that this and a lot of his other work, including multiple greenhouses and a micropropagation lab for work with “some exceptional endangered plants,” takes place outside of public view, his expertise can be seen firsthand in the Zoo’s geographic themed areas (like “Africa Rocks!”). “Every time we open a new space, it always requires us to dig in and talk to the wildlife care teams, and talk to everyone involved in creating these ecosystems, and really try to create something pretty special,” he says.

One of Graves’ most recent projects was the creation of the William E. Cole Hummingbird Habitat, located just before the entrance to the highly anticipated Wildlife Explorers Base Camp, the all-new children’s zoo within the Zoo slated to open next month. The tremendous amount of detail involved means Graves and his peers

gain a deep knowledge of the animals they’re creating an environment for in order to establish a fully functioning ecosystem. “There’s a lot of intentionality, a lot of real deep dive into what we are putting into these habitats that’s going to most benefit the animal and show off our botanical collection at the same place,” he says. “The best example that I can think of in the Hummingbird Habitat is, we have a critically endangered plant…it’s always been in our nursery, we’ve never been able to take it outside of our nursery because we’ve never had an appropriate space for it. It is native to the high altitude Peruvian Andes, and it is known to have a mutualistic relationship with hummingbirds. We were able to create an appropriate space to put it out there, show it to the public, be of benefit to the hummingbirds, and also be regionally appropriate. And when we can check all those boxes, I consider that a job well done.” As all eyes will be on the Zoo once Wildlife Explorers Base Camp makes its grand debut, it will present a renewed opportunity to see Graves’ handiwork with a new appreciation for the careful and deliberate planning that goes into designing seamless spaces for the visitors’ experience as well as for the animals who inhabit them, which is exactly Graves’ goal. “What we want to do is create these compelling ecosystems that are going to reflect the aesthetics of the region that they’re from,” he says. “So, instead of just focusing on one bird, or one plant, or one flower, we want to create the whole experience when people walk through a habitat like that — that they may not consciously notice the interaction, but hopefully they will subconsciously take it away with them and just notice, ‘Wow, so that’s how these hummingbirds should exist in their natural spaces.’”

When asked if he might sometimes feel his work is overlooked (though together the Zoo and Safari Park are an accredited botanic garden, the animals tend to get top billing), he’s quick to shrug it off, instead focusing on his ability to help visitors see how his department’s work fits into the global conservation strategy. “I see a lot of opportunities for me and my team to educate people on how ecosystems work,” he explains. “Every species in our collection, whether it’s botanical or animal, doesn’t exist in a vacuum. Everything is interrelated in these natural spaces, and that’s really what we want people to understand. We want visitors who come in to stop for a second and think, ‘What would this landscape look like without plants? What would it look like without animals?’ And then think about how all of those organisms interact to create this tapestry of life.” sandiegozoo.org