Surfers and scientists came together to support the fight against cancer at the annual Luau & Legends of Surfing Invitational. Dozens of surf legends, each paired with a team of four, participated in friendly competition to raise funds for the Moores Cancer Center at UC San Diego Health. Participants were required to show proof of vaccination or a negative test within 72 hours the event, which also had on-site testing with a five-minute turnaround time. This year’s scaled-back gathering presented the Alli Award to surf legend Fernando Aguirre, known as the “Father of Olympic Surfing,” to recognize his 20-plus-year efforts to finally make surfing an Olympic sport. Luau & Legends was founded in 1993 by Sam Armstrong and John Otterson. 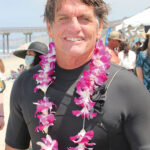