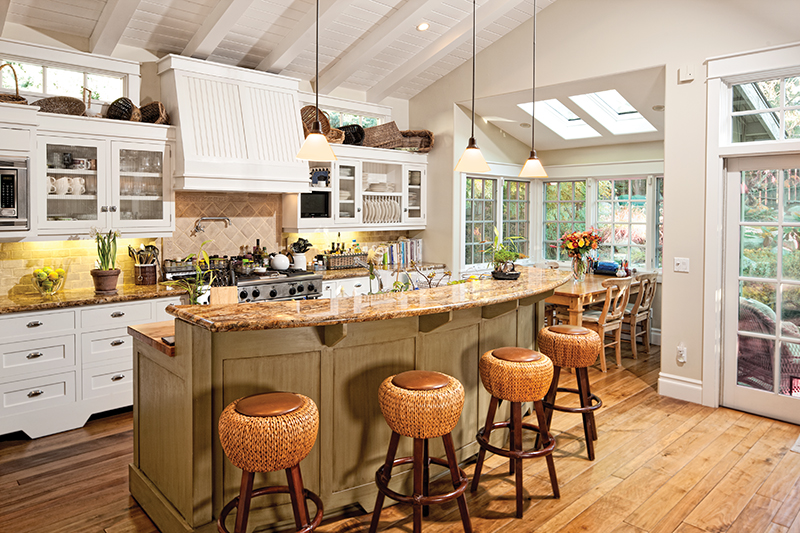 Susan Taylor is sitting, not at the anchor desk, but at the kitchen table in her comfortable, craftsman-style home in North County. She is as polished and poised as she was when delivering the weeknight news on NBC San Diego. But just days before this interview, she signed off for the last time, an often emotional good-bye from the studio filled with family and friends who had come to see her off. Her husband Ed and son Dillon were there, along with her parents, and former longtime co-anchor Marty Levin with his wife Gail. Choking up at times, Taylor reflected on her long career in television news. “Thank you for letting me come into your homes every night,” she told the audience. “It’s been such a privilege, such a joy.” After nearly 16 years in the coveted anchor slot, it was time to go.

“I’m still emotional about it now,” Taylor tells Ranch & Coast, her eyes filling with tears. “It’s been a huge part of my life. It’s what I know. To walk away from that — some would say it’s very risky. To me it feels like the right thing to do.”

Fortunately, Taylor won’t go far. In the New Year, she starts her new job at Scripps Health as executive director of external affairs, a position in which she will raise awareness and funds for what she calls a “world class health care system” while spending more time with her family. “All of a sudden, this opportunity from Scripps presented itself and at the same time our son was saying, ‘Mommy, I want you home. I want you home,” Taylor recalls. At the time, she was in the middle of negotiating a new contract with NBC, one that would have kept her at the station for many more years. But Taylor, who had missed being home in the evenings with her family, had second thoughts. “I thought by the time that contract would be up, our son would be gone, and I just didn’t want to have any regrets.”

As for her family, Ed says: “We’re thrilled to have her home,” recalling the years his wife worked until midnight, all the family dinners without her. But some things probably won’t change much, even though Taylor will be home more. A former restaurateur who managed restaurants all over the West, Ed is definitely the chef in the family. “I’m banned from the kitchen,” Susan jokes. “It’s part of the marriage vows.” To be fair, she does scramble eggs, and on special occasions like Father’s Day, she tries her hand at meat loaf or lasagna, Ed’s favorites, although, he teases, the results are often “touch and go.” So dad presides over the spacious kitchen with its double oven, warming drawer, two dishwashers, and granite-topped counter where guests can pull up stools and linger while he cooks. The kitchen is open to the living room, where the family spends most of their time, gathered around the rustic, stone fireplace. The room has a view of the backyard where the family likes to lounge on the patio.

In their spare time, the couple and their son love to ski, walk their dog Chewbacca (yes, there is a certain resemblance to the Star Wars character), or get together for casual dinners with friends. Taylor’s parents join them for supper on Sunday nights. And when they do go out, they like to dine at Zel’s, En Fuego, Jake’s, and Pacifica Del Mar, where Susan and Ed met 15 years ago. It seems that fate brought them together: Susan, who usually worked Fridays, had the night off, and each decided to take out-of-town guests to Pacifica.

The couple also finds time to give back to the community: they’ve chaired events for such causes as the Alzheimer’s Association of San Diego and Imperial Counties, and Susan has long been involved with the American Cancer Society’s “Making Strides Against Breast Cancer” walks, which she describes as a “sea of pink, 20,000-people strong.” That fundraising experience will be invaluable at Scripps Health, where Taylor will work with the Scripps Foundation, as well as spread the word about the company’s ambitious expansion plans. Its cornerstone, she says, is the Conrad Prebys Cardiovascular Institute, a seven-story tower opening in 2015 on the Scripps Memorial campus.

Taylor has another, very personal reason for joining Scripps. “Scripps saved my dad’s life three years ago,” she says. After undergoing very complicated open-heart surgery, he was in the hospital for seven months, in a coma for two. “I spent all hours of the day and night walking the halls of Scripps, so I actually saw it from the inside. I really believe in what they’re doing.”

Looking back on her 30-plus years in the news business, Taylor is grateful for the places she’s been, the people she has met. “It allowed me to go see the world, to interview the best and the brightest, and to also see the darkest part of human nature.” During her career, she covered such major stories as the Persian Gulf War, the O.J. Simpson trial, the Northridge earthquake. But it’s a story about everyday people — two women who had been pen pals for 50 years, but who had never met — that still makes her cry. Taylor and her Miami station arranged a meeting for the women — one of whom was seriously ill — an experience that made her realize: “This is why we do what we do. We have the ability to affect positive change.”

Other memorable stories: bearing the Olympic torch through Presidio Park for the 2002 Salt Lake City Olympics; sailing into San Diego Bay aboard the USS Constellation, its final voyage, with troops coming home from Iraq; and covering San Diego’s devastating wildfires. “When there’s a big story, San Diego pulls together,” she said on her final broadcast. “There is something magical about this place and the people who live here.

For Taylor, the New Year brings new opportunity, if not exactly a “new you.” “It’s the same old me,” she says with a laugh, “just maybe without so much hairspray and makeup.” But she clearly looks forward to not only the personal time, but the professional challenge, ahead: “It’s scary to change,” she says. “But it’s exhilarating. It’s good to get out of your comfort zone.”     Andrea Naversen