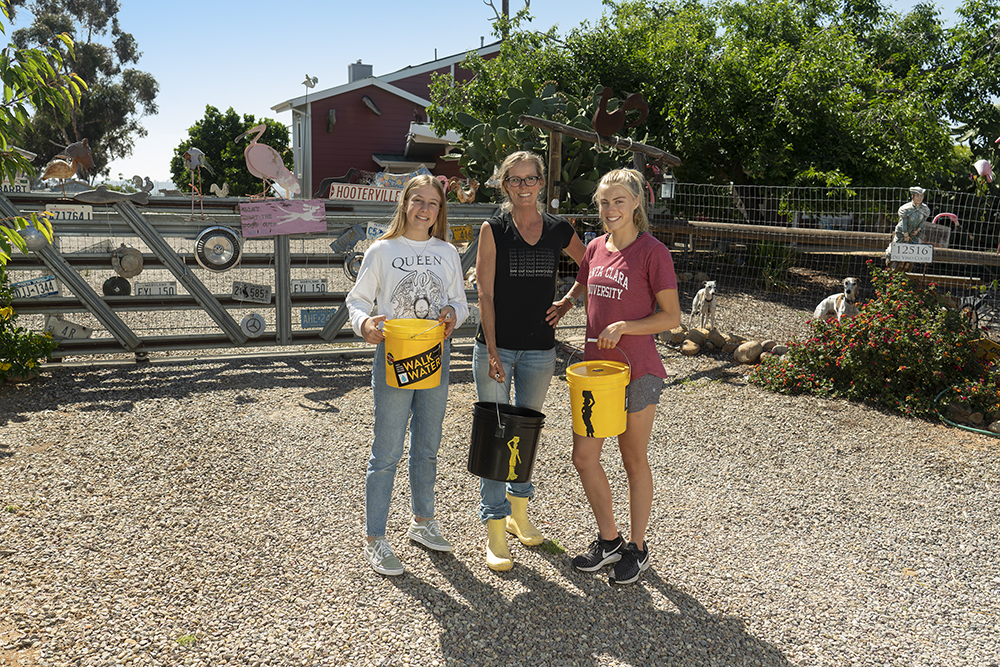 Elizabeth Rabbitt inspires teens to give back

Hooterville, as it is widely known, is a fictional farming town popularized on such 1960s sitcoms as The Beverly Hillbillies, Petticoat Junction, and Green Acres. But it also is a treasured local landmark, a real-life farm perched high atop Del Mar Mesa with sweeping views of the ocean to the west and Palomar Mountain to the northeast. The so-titled seven-acre property with a remodeled house boasts barns (brightly painted by neighborhood children), vegetable gardens, and fruit trees. It is also home to an assortment of animals — chickens, goats, horses, and rescue donkeys — and a quirky hodgepodge of garden ornaments (including pink flamingos), fountains, and signs. Presiding over this idiosyncratic “roost” is Elizabeth Rabbitt, a slim, tanned blonde wearing a broad smile, jeans and a T-shirt, and bright yellow galoshes.

Don’t let her downhome demeanor throw you off. Rabbitt is an accomplished executive, having retired as CEO of Sharp Community Medical Group (before that, she was CFO of Sharp Memorial Hospital). Since then, Rabbitt has carved out a life with community and philanthropy at its core. Down the road, Elizabeth Rabbitt Park is named in her honor, and Hooterville has long been a gathering place for neighborhood children, a place where Rabbitt teaches them about giving back to the world.

One of the early “settlers” of Del Mar Mesa, Rabbitt bought the property in 1995 when it was a dump, littered with old mattresses, box springs, tires, and other debris. Even worse, she had to bring in her own water. So Rabbitt bought a fire hose, pump, and water tank, and rented a contractor’s meter, tapping (legally) into a fire hydrant more than two miles down the road. Eventually, first Bill Davidson and then other developers began building houses, including roads and utilities. That finally meant city water. Decades later, Rabbitt is passionate about conserving this precious resource. Rain barrels dot the property — one whimsically painted in the distinct black and white pattern of a Holstein dairy cow.

So Rabbitt inspired “Walk for Water,” a volunteer project spearheaded by students from Canyon Crest Academy, Torrey Pines High School, and Female Athlete Volunteers (FAV), a San Diego-based organization that links teenage athletes with volunteer opportunities. The idea was to demonstrate the need for clean, safe drinking water, especially in Africa. There, as in many parts of the world, women walk hours and hours every day just to collect water for basic daily needs. Often the water is contaminated, leading to disease and death.

In a symbolic show of support, the students carried buckets from Hooterville down a canyon to Duck Pond in Los Peñasquitos Canyon Preserve, scooping up water for the return trip. The teenagers asked the community for donations and ultimately raised $15,585, enough to drill a small well at a school in Kenya founded by Maranatha Volunteers International, a nonprofit that organizes short-term mission trips to build schools, churches, and other projects around the world.

“Everyone was so supportive,” says 14-year-old Mia Goldman, a Canyon Crest Academy freshman. “It was cool to see everyone come together.” Adds 18-year-old Emma Reeves, a Torrey Pines graduate, “It opened my mind to what we have. Water is such a huge issue around the world.” Their efforts may seem like a drop in the bucket when one considers the global water crisis, but the teens hope that with Rabbitt’s mentorship, their project and more in the future will have a ripple effect of broadening awareness and support. 916.774.7700, maranatha.org   Andrea Naversen