At Home With Katherine and Steve Atkinson

It is a glorious Saturday morning when Channel 10’s Steve Atkinson and wife Katherine welcome Ranch & Coast to their stunning home in Rancho Santa Fe. Spring rains finally have given way to sunshine that spills into their expansive indoor-outdoor living area. Folding doors are open wide, revealing a California room and beyond that, a backyard barbecue and entertainment area. Parked on the patio is a miniature red sports car, often “driven” by the couple’s three-year-old granddaughter, Kennedy. The Atkinsons carve out precious family time on weekends — which often means babysitting — because of their competing work schedules and Katherine’s extensive international travels with a La Jolla biotech. Home is truly the cornerstone for two successful people who, Steve says, can be “like ships passing in the night.”

Steve has been a familiar face in San Diego for more than 13 years, co-anchoring nightly news shows on 10News San Diego with co-anchors Kimberly Hunt and Lindsey Peña. An awarding-winning reporter with a dozen regional Emmy awards on his office shelf, he has delved into border issues and profiled community leaders, as well as emceed countless events for the March of Dimes, the SEAL Family Foundation, and other worthy causes.

After a stint as an anchor herself, Katherine has made her own mark as an accomplished executive in life sciences and health care. Over the past two decades, she has held sales leadership roles at such biotechs as Edico Genome and Illumina, and also worked at Fisher Scientific and Beckman Coulter. She is now the Chief Commercial Officer at Epic Sciences, offering tools to help physicians treat cancer. “Our mission is all about extending life,” she says.  “The right treatment for the right patient at the right time.” Her husband is a huge admirer. “I think you’ll find she’s quite the boss who learned to ‘lean in’ before Sheryl Sandberg made the phrase famous,” Steve says, referring to the bestseller written by the Facebook COO about empowering women in the workplace.

The couple, who will celebrate their 29th wedding anniversary in October, met in junior high school in their native Texas. But, they didn’t begin dating until years later, as seniors at the University of Houston, where they studied broadcasting. Katherine was the first to land a job in television as an anchor and reporter in Arkansas; Steve soon followed at a competing station. They later returned to Texas where Steve, the son of a high school coach, worked as an award-winning sportscaster and reporter for stations in Austin and Dallas, and Katherine made a successful leap into life sciences. Then, after moving on to Denver for several years, Steve switched from sports to news at Channel 10 when the couple moved to San Diego in 2006. Children Veronica and Christopher graduated Cathedral Catholic High School and attended Gonzaga University in Spokane.

Katherine, who is of Italian and Puerto Rican heritage, loves to cook for family in the expansive open kitchen where everyone gathers around the island. “It brings us together as a family,” she says. “I feel that I’m nourishing people’s souls.” One of her specialties is braciola, rolled beef stuffed with bread crumbs, Parmesan, parsley, and pine nuts. She collects cookbooks — Barefoot Contessa by Ina Garten is one of her favorites — housed in a pantry off the kitchen where she also displays her prized pottery, purchased on trips to Italy and Greece. The couple’s daughter, an event planner, creates vibrant tablescapes to add to family festivities. Steve jokes that he is an “excellent crockpot cook” but Katherine says his true talent is as “an awesome griller.” Adds Steve, “You’ve got to know how to barbecue if you’re from Texas.” On occasion, the Atkinsons will “fly in” barbecue from their favorite Texas restaurants, and barbecue is always the centerpiece of their Christmas Day feast.

In a bit of irony, the man who has spent decades in television “is not a big TV guy.” Although he watches sports, Steve, or “Poppa,” as his granddaughter Kennedy calls him, can usually be found on weekends playing “Barbie and [G.I.] Joe” with Kennedy.  Steve is “Joe.” He is also an avid cyclist — the sport he calls “my golf” — spinning around North County for charity events in support of military causes. An aspiring screenwriter, Steve has won several awards for his screenplay No Mountain Too High, based on the life of Hal O’Leary, founder of the National Sports Center for the Disabled, a Colorado-based program originally designed to teach disabled children how to ski. What began as an experiment, says Steve, is now “the model for outdoor therapeutic rehabilitation.” And, in an effort to keep pace with an ever-changing media landscape, he is studying online for a digital audiences degree at Arizona State University. “I’m trying to evolve as the times change,” he reflects. “If you don’t embrace change, I think you fall behind.”

While Steve and Katherine love to travel — Barcelona, Thailand, Montenegro, Croatia, Slovenia, and a bicycle trip through Tuscany are among their favorites — they also are content walking the beach, paddle boarding, or picnicking at Power House Park in Del Mar. After exploring the world, the Atkinsons treasure home.   Andrea Naversen 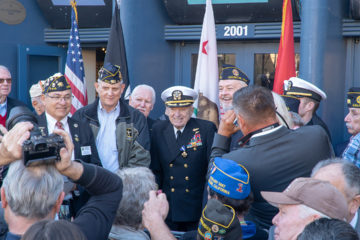