“They say a house picks you. This house picked me.” Mary Drake is sipping coffee at the kitchen counter with Hudson, her husband of 18 years, in their Rancho Santa Fe home overlooking the polo fields. Longtime La Jollans, the accomplished, philanthropic couple traded their three-story, 1920s Spanish-style home, designed by famed architect Richard Requa, for a single-level sanctuary that is not only more manageable but accessible. It is also close to the stables where Mary boards her beloved horses and rides every day. The home had been renovated by interior designer Sue Kelly, who transformed a cold, contemporary space into a bright, sun-filled showplace. “Every detail in this house was so thought out,” says Mary. “We live in every room.”

Kelly had gutted the house for the previous owners, tearing down walls that once divided the living and dining rooms, raising the ceilings (from eight to eighteen feet in the main area), and exposing wood beams. She not only opened up the house, she warmed it up, replacing black granite counters and a mirrored backsplash in the kitchen, for example, with a slab of broom-brushed limestone for a rougher, textured look, and faux-finishing the cabinets. Kelly also installed brushed limestone floor tiles in the living and dining areas. But rather than ripping out highly polished marble floors in the entry and around the pool, she had them honed so they weren’t so “slippery and new.” In the family room, Kelly added sliding barn doors, a clever way to conceal the large screen TV. Even the polished aluminum entry gates got a makeover, painted with metal dust and chemically treated to look like iron. “The house came alive,” says Kelly. “I brought the character out of the house that was hidden.”

The outdoor spaces are equally stunning, including a lap pool and spa just off the entry, with a fireplace and plenty of space for entertaining. Kelly expanded the shower, steps from the pool, installing a curved glass block wall to provide privacy and let in light, and carved out space for a water closet, sink, and cabinet. The backyard deck offers expansive views, and Kelly added an outdoor kitchen complete with a pizza oven and barbecue. 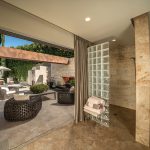 The Drakes put their own personal stamp on the home, adding interior touches and filling it with art. Walking Men, a piece by Cuban artist Damian Aquiles, is crafted from scraps of reclaimed metal from old cars, paint cans, even refrigerator doors. The individual pieces took eight hours to install on the living room wall. The Havana-born Mary discovered the artist on a trip to the island nation, which her family fled decades ago during the Cuban Revolution. There are also works by her friend, the Argentinian painter Claudia Di Liscia, a metal sculpture by San Diego artist Matt Devine, and a centuries-old drum from the David Alan Collection in the Cedros Design District.

Hudson’s study reflects his accomplished, 40-year career as an aerospace executive with Teledyne and other companies. There are models of the air and spacecraft he helped to develop and mementos from astronauts

Neil Armstrong and James McDivitt. A framed certificate from the International Air & Space Hall of Fame, which honored him in 2017, sums up his contributions: “visionary leadership, team building and innovative solutions to critical challenges in the aerospace industry” as well as “lifelong service to others.” He is especially proud of his selection as a non-partisan White House Fellow in the Johnson and Nixon administrations (he was one of only 18 recipients selected from a field of thousands). The life-changing experience launched him into government service and, later, executive positions at top aerospace corporations. He now serves on the board of the San Diego Air & Space Museum. The walls of his study also reveal a more down-to-earth pursuit: his passion for fly-fishing. There are models of the many trout he caught and released on fishing trips around the world, from Alaska to Zambia.

Mary’s office, which opens onto the patio and pool, is festooned with colorful ribbons from riding competitions won by the couple’s horses (they have four hunters and one jumper). A huge outdoor “light poem” near the home’s entrance, an 18th anniversary gift from Hudson, also speaks to Mary’s love of the equine world. The piece, by London-based artist and poet Robert Montgomery, is illuminated at night. It reads: “And the trees are sentinels of something, standing there between the buildings, breathing like horses in the night.” Reflects Mary, “It makes me feel secure. But most importantly, it makes me think of my horses.”

The couple’s commitment to animals and children — they have three of their own and four grandchildren — has inspired their philanthropy. Scampering about the house are three dogs and two cats; all but one were rescued. Mary is on the board of Thrive Animal Rescue, founded by Cece Durante Bloum and Georgia Spogli to find loving homes for abandoned dogs. Hudson served on the board of Rady Children’s Hospital and Ronald McDonald House Charities of San Diego, while Mary founded RMHC’s ROMP gala, now in its tenth year, to raise critical funds to house, feed, and support the families of critically ill children.

Although the Drakes have traveled widely, “cruising from one end of the world to the other,” says Hudson, their lives are more settled now. They have discovered that, after all their far-flung adventures, there is no place like home.   Andrea Naversen