The island of Oahu is still  far and away the most popular destination in the Aloha State. That doesn’t mean everyone is only headed to Honolulu and Waikiki. A rapidly growing destination just a short drive from Honolulu on West Oahu is drawing visitors in droves: Ko Olina.

Two of the most popular resorts on this stretch of coast are the Four Seasons Oahu at Ko Olina and Aulani, a Disney Resort & Spa. Both are stunning, can’t-go-wrong options that grace this glorious side of the island.

There’s a standard expectation for those familiar with the Four Seasons level of service, and the Oahu property doesn’t disappoint. Previously the JW Marriott Ihilani, the resort underwent an 18-month, $500 million renovation before debuting as a Four Seasons property in June 2016. As people are still discovering this newest choice within the brand on the islands, it is considered an entry point into the Four Seasons family of Hawaiian resorts and is thus the lowest-priced of the options, which include Maui, Hawaii, and two Lanai properties. That said, nothing about Four Seasons Oahu is anything less than a premium experience. Spacious guestrooms offer special touches that cater to Hawaii’s international clientele, including iPads from which guests can message hotel staff in multiple languages. Deluxe accommodations soar from one-bedroom suites to a breathtaking 3,200-square-foot penthouse suite with ocean views from every room, featuring an 800-square-foot terrace large enough to host a private wedding (it’s already happened). Not to be outdone, the presidential suite offers private access to a rooftop terrace, a theater room, and even a master bedroom lounge if you just need some quiet time in your 3,840-square-foot digs. 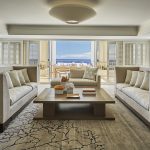 What Four Seasons does best here is ensure a seamless experience at the highest level. Famed celebrity chef Michael Mina created Mina’s Fish House at the resort, a “line-to-table” restaurant featuring fresh seafood in delicious preparations that showcase the bounty of the island and the waters surrounding it. Many of the resort’s amenities are complimentary to guests, from childcare to use of the fitness and spa facilities (treatments are additional), and the rooftop tennis courts. The lagoon shared with next door neighbor, Aulani, offers calm waters for snorkeling, and equipment is available at no charge. In the bright, airy lobby, local artisans share the beauty of traditional Hawaiian items, including jewelry handcrafted from shells found exclusively on the island of Ni’ihau, Hawaii’s “Forbidden Isle.” Off-property, a guided hike to Ka’ena point, Oahu’s westernmost tip, is a surprise lesson on the untouched beauty that still abounds here. A nesting ground for giant, majestic albatross, natural rock formations, secluded napping spots for the Hawaiian monk seal, and views that wrap around the island are nothing short of breathtaking, and make leaving the paradise of the resort worth it — temporarily, of course. fourseasons.com/oahu

For a decidedly different, but equally spectacular vacation, Aulani is a Disney-lover’s island paradise. Created with loving attention to the island and the people who’ve inhabited it for centuries, the emphasis in every detail about the property is Hawaii first, Disney second. And because this is Disney, there is a lot of detail. Those well-versed in the culture know about “hidden Mickeys” — pictures or silhouettes of Mickey tucked in secret spots around Disney parks and resorts and in Disney films — and there are plenty here too. The traditional Hawaiian quilts that cover the guestroom beds incorporate him in their unique design, and he can also be found in the artwork on the walls. Because of the Hawaii-first mantra, there are other hidden characters around the resort too that kids will delight in seeking: Menehune, the impish, playful little people of Hawaiian lore.

Disney magic is all around the resort. Beloved characters do visit, but that’s all they’re doing, since this is the home of the Hawaiians, after all. However, everyone is welcomed and made to feel as though they’re paying a visit to extended family. The kids’ center is even called “Aunty’s House,” where kids can happily spend an entire day while the grown-ups soak in some of the adult amenities, including a full-service spa and fitness center.

The most spectacular, must-see item to check off on a visit to Aulani is Ka Wa’a, the resort’s signature luau experience. As with other luaus, there’s fire, vibrant music, energetic and beautiful dancing, and colorful traditional costumes that illustrate the Hawaiian story from ancient times to present day. But here, the show is also inflected with just enough Disney, plus a story thread throughout that ties specifically to Ko Olina and Oahu, to keep all ages enthralled from start to finish. The food is delicious, the service is spectacular, and the show is brilliant. disneyaulani.com