Some Ferrari purists are not enamored with Ferrari’s GTC4Lusso, reacting to the hatchback styling of this car and its predecessor, the Ferrari FF. I didn’t swoon over the FF either, but when the GTC4Lusso arrived in my driveway for a week’s evaluation, I was smitten. Each time I drove this exquisite vehicle, my affection deepened.

Although the Ferrari 488 GTB may be the company’s most popular model and is quite quick on its feet, there’s something about the Lusso’s 6.3-liter V12 with 13:1 compression singing at 8,000 RPM that the 488’s V8 doesn’t match. Few sounds on the planet match that of a Ferrari V12 for the car enthusiast. Years ago, when I drove a 365 GTC4, the 12-cylinder, 2+2 Ferrari that I’d pick as one of the spiritual ancestors of today’s Lusso, I searched for underpasses and tunnels just to hear that wonderful howl.

Driving the new Lusso is just as enthralling. The power of its 680 horses stabled under the sculptured hood is transferred to all four wheels automatically — 80 percent to the rear and up to 20 percent to the front. And up front, 90 percent of that power can be directed to one wheel if sensors find it necessary. The Lusso’s four-wheel connection to the road doesn’t stop there. It also has a four-wheel steering system that enhances rear stability in turns. The “thrust vectoring” delivers the ability to turn just the inside rear wheel into the corner to maximize grip. Torque vectoring isn’t new, but Ferrari’s system takes handling to a higher level. The big GT rarely pushes in a turn and makes a reasonably skilled driver feel like a Formula One prospect. Lusso in Italian means “luxury,” and this Ferrari puts an exclamation point on the word. From the new bodywork developed by in-house designers to the rich, elegant interior, this is a pure sports car you’ll want to spend more time in. The driver-focused instruments and competition-developed steering wheel are what you’d expect in a 190 MPH Ferrari. The new infotainment system and beautifully crafted, supple leather seats set the stage for luxury touring. We tested the Lusso’s ability to haul passengers, inviting a couple to ride along to a favorite restaurant in the nearby mountains. The pair owns a collection of interesting vehicles and were happy to sample the Lusso’s rear seating. Although neither were twentysomethings or yoga instructors, ingress and egress was just as easy as most luxury coupes. They enjoyed the 12-cylinder music as much as we did, and may have been incentivized to order a Lusso of their own (which starts at a base price of just a hair under $300,000). If they get one, we may to have experience the 3.4-second 0-to-60 dash from the rear seat on the next trip. Brian Douglas 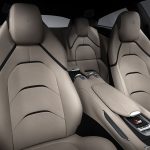