At Home With Denise & Bertrand Hug 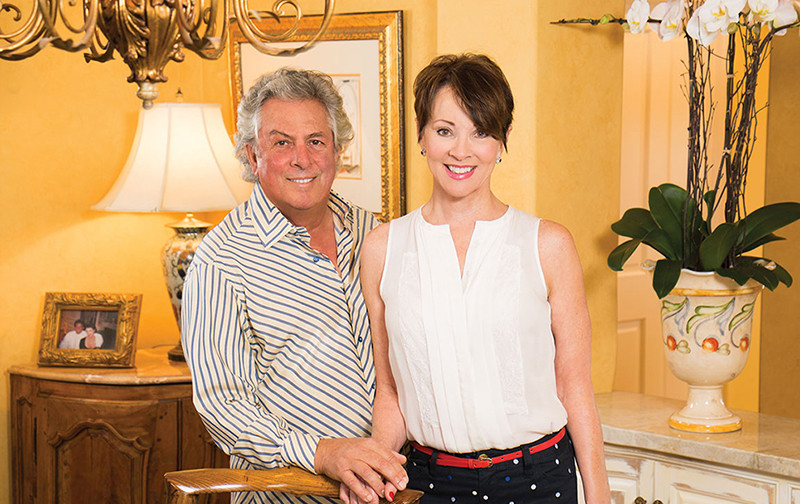 At Home With Denise & Bertrand Hug

It is no surprise that the kitchen is the heart of Denise and Bertrand Hug’s new home. Proprietors of Rancho Santa Fe’s Mille Fleurs and Bertrand’s at Mister A’s in Bankers Hill, the Hugs are well known for fine food and wine. However, when they dine at home, it is not about haute cuisine nor Michelin stars.

“I like simple, country stuff,” says Bertrand, whose roots are in rural southwest France. “I like chopping, dicing, and braising.”

“…with a little glass of red wine,” adds Denise. The Hugs needed more room to entertain, so they moved recently from their longtime home in Rancho Santa Fe’s Covenant to Fairbanks Ranch. Bertrand wanted to surprise Denise, so he began looking at houses with local real estate agent William (Billy) Talbott. Although the single-level home was “dated and dark,” Bertrand immediately saw the possibilities. Denise quickly agreed. “What I liked so much was the view,” she says. “The view says it all.”

Most of the rooms in the house overlook a lush park with grassy pastures and riding arenas, and trails that meander through Fairbanks Ranch. But, inexplicably, a wall blocked vistas from the master suite. Builder Jim Sylvester and his son Spencer, who served as the project manager, knocked down the wall, replacing it with windows and French doors to frame the sweeping view. The Hugs also made major changes in the all-important kitchen, enlarging the space and opening it up to the adjoining dining room and family room. They painted the walls lemon yellow, expanded the island, and installed light-colored marble counters. Architect Bill Hayer brightened the room even more by adding a skylight so that the sun’s rays spill into the room. The Hugs recreated the hand-painted Portuguese tile in their Rancho Santa Fe restaurant, a flower pattern from which Mille Fleurs takes its name.

On the bar, there are housewarming gifts from friends, including a goose painted by Sharon Ladeki, wife of restaurateur Sami Ladeki, and a portly butler holding a tray from Connie and Bill McNally of Rancho Santa Fe’s McNally Company Antiques. Connie gave the home its rustic yet refined French Provincial look, adding gleaming wood tables, cabinets and chairs from the 18th and 19th centuries, carved wood sconces, and other touches, bought from estate sales and the McNally Company’s extensive collection of antiques.

The Hugs “aren’t afraid of color,” says Connie, something of an understatement, given that walls in the home are splashed with sunny, saturated shades of pumpkin, lime green, and yellow, then glazed by Olde World Artisans. The elegant living room mixes periods with panache: a contemporary bronze-and-glass coffee table complements a cashmere sofa by Michael Taylor and 19th century French bergere chairs. In the family room, Olde World Artisans lightened the dark mahogany paneling and white oak floors replaced the carpet. Sophie and Henry, the couple’s two dogs, both adopted from shelters, like to curl up on the large sofa that Connie reupholstered.

Accents from France include an inlaid wood cabinet in the foyer from Bertrand’s great grandfather, a woodworker, and books and 100-year-old plates from his mother, a teacher who taught Bertrand and other pupils in a one-room schoolhouse in their small French village. Family friend Spencer Douglas gave Bertrand a French flag from the 1920s along with a statue of Napoleon. The Hugs also have a collection of vintage posters from Henri de Toulouse-Lautrec and oils from Guy Buffet, the artist known for his whimsical paintings of chefs and waiters. Scattered throughout the house are photographs of some of Mille Fleurs’ famous visitors and friends: President and Mrs. Gerald Ford, Richard Nixon, George W. Bush, Jack Nicholson and Dick Enberg, Jenny and the late Sid Craig, Dean and Alex Spanos.

There are also photographs of Julien, the Hugs’ only son, who died three years ago after suffering from severe depression. During that dark time, the Hugs remember, with gratitude, how their friends rallied around them, brought them food, and offered solace. “They were there for us,” Bertrand recalls. “They took care of everything. It was unbelievable.”

While it was hard to leave their former home, so filled with memories, the Hugs, who recently celebrated their 40th wedding anniversary, are trying to move on. Sitting at the kitchen table in their bright, cheerful home, with light streaming through the windows, there is a feeling of optimism. “I think, maybe, the change was good for us,” says Denise.

“Is this a new chapter in your life?” they are asked. Bertrand and Denise Hug at home in Fairbanks Ranch