Theatre at Moxie is fearless. An imaginative plot drives the story of the current production, Dance Nation, a play about growing up and using fierce ambition to harness the power of self knowledge. The fight to unleash that massive energy is captured in playwright Clare Barron’s raucous pageant of ambition and ferocity. In it, pre-teen competitive dancers (performed by mature adults) dream of taking over the world. What if their new routine doesn’t measure up? There is a Plan B, which involves forcing their way to the top of the Boogie Down Grand Prix in Tampa Bay. Choreography matters to the dancers, but finding themselves matters more. Barron’s play was a finalist for the Pulitzer Prize for Drama. Artistic Director Jennifer Eve Thorn directs. Thru Sept. 15, moxietheatre.com 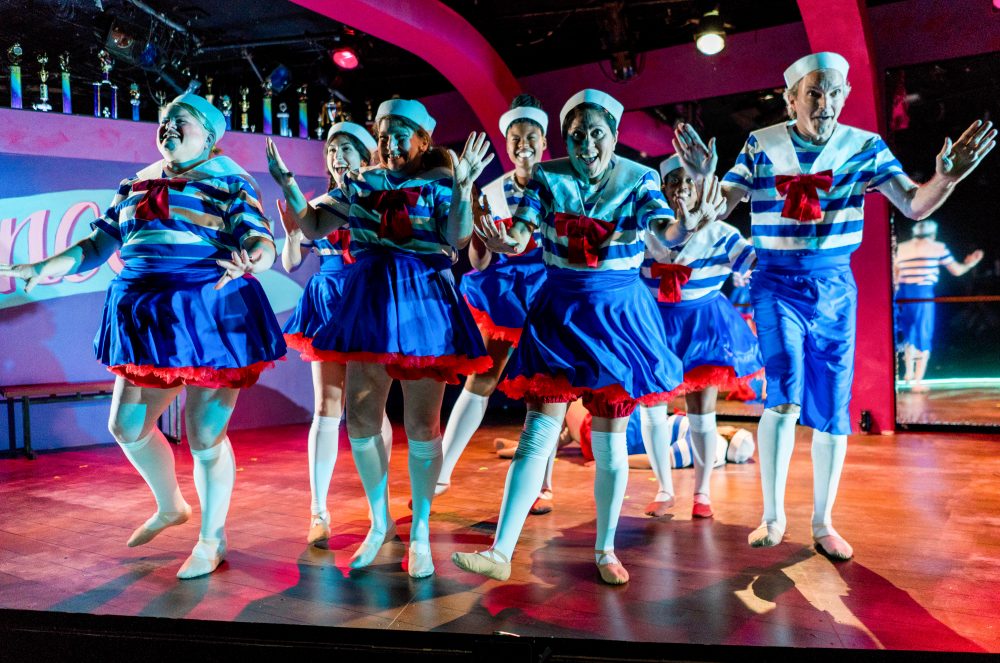 Verona’s Montague and Capulet families have been feuding for ages, and whenever they meet, violence breaks out. But when Romeo glimpses Juliet across a crowded dance floor, something different happens. Can star-crossed love survive in a world of rivalry and rage? With a plot featuring a masked ball, sleeping potions, and all-out brawling in the street, wrapped in a text full of soaring poetry, it’s no wonder Romeo and Juliet has inspired countless adaptations. Thru Oct. 6, theoldglobe.org Award-winning Artist Natasha Ragland presents an exhibit of original paintings at the Georgina Cole Library in Carlsbad. Ragland has created a large body of work featuring fanciful scenes of animals, dancers, musicians, and landscapes composed from elements of the local terrain.  Her deep conviction for veganism and preserving the earth is evident in her paintings as well as her life’s mission to uplift the spirit through her art and music. Thru Nov. 1, 760.434.2870 With the glorious music of Mozart as a backdrop, Peter Shaffer’s Tony Award-winning tale, Amadeus, starts the North Coast Rep season on a rousing note. Told with humor, intrigue, and theatricality, it explores two men: Antonio Salieri, who is consumed with jealousy, and Wolfgang Amadeus Mozart, who is blissfully unaware of his extraordinary gifts. Sept. 4-29, northcoastrep.org

The 2019 GI Film Festival San Diego invites families to its annual Family Movie Night at the USS Midway Museum. This year’s film is the action-packed Captain Marvel, the story from Marvel Studios that follows Carol Danvers (played by actress Brie Larson) who becomes one of the universe’s most powerful heroes when Earth is caught in the middle of a galactic war between two alien races. Guests will have a chance to meet U.S. Air Force Brigadier General Jeannie Leavitt, who was the first female fighter pilot in 1993 and the first woman to command a USAF combat fighter wing. Sept. 6, gifilmfestivalsd.org The Italian Renaissance and Baroque periods will come to life at the Timken Museum of Art. The goal of the exhibition featuring the themes of birth, death, and resurrection is to share some of the greatest drawings of these famed art historical periods, many of which will be seen for the first time in San Diego. Sept. 6-Dec. 15, timkenmuseum.org Tony Bennett: The “I Left My Heart” Tour with special guest Antonia Bennett

The Tony Bennett performance scheduled for September 14 at the San Diego Civic has been cancelled.  Bennett, 93, is recovering from a virus and to ensure his full recuperation he has been advised to avoid travel through the next two weeks.  Refunds are available at the point-of-purchase.

At the age of 92, Tony Bennett is not slowing down. His latest recording with long-time friend and musical colleague, Diana Krall, “Love Is Here To Stay,” topped the jazz charts upon its debut and was nominated for a Grammy Award. The album celebrates the music of the Gershwins and includes the jazz standard, “Fascinating Rhythm,” which Bennett and Krall perform as a duet. The inclusion of the song on the new album was the impetus for a Guinness World Record title for Tony Bennett, who in 1949, under his stage name of Joe Bari at the time, made his very first recording of the Gershwin standard. He performs for one night only at the Civic Theatre. Sept. 14, ticketmaster.com Bob Weir, rhythm and lead for the Grateful Dead, Dead & Company, and RatDog, has a new trio that will be exploring songs of the Grateful Dead and more, featuring the bass of legendary musician, producer, and current Blue Note Records president Don Was and drums from frequent Weir contributor, Jay Lane (Furthur, RatDog). Sept. 18, humphreysconcerts.com A fascinating story set to music will come to life at the downtown San Diego Civic Theatre. Originally produced at Hartford Stage and directed by Darko Tresnjak, a past artistic director of The Old Globe and Tony Award winner, Anastasia will have broad appeal to theatre fans. Inspired by previous films, the theatre version of Anastasia transports audiences to other places and times, from the dimming of the Russian empire to high energy Paris of the 1920s. A young woman pursues the mystery of her past, enlisting memorable characters to help her along the way. The great Terrance McNally wrote the book, and Stephen Flaherty created a new score, with Lynn Ahrens providing lyrics. There are 16 new songs in addition to six from the animated film. This show is sure to please. Oct. 1-6, broadwaysd.com The Talmadge Art Show presents Carmel Valley Artists, an exhibition at the Marriott Del Mar featuring works by 50 contemporary craft artists who create handmade art including clothing, jewelry, cards, purses, pottery, and mixed media.  The Talmadge Art Show began in 1992 with a discussion between art collector Sharon Gorevitz and several artists who wanted to find a positive environment publicly to sell their art. The first show included five artists and was in Sharon’s 1936 Talmadge Park home. Within three years it grew to more than 25 artists and moved to the Hillcrest area of San Diego. Today, The Talmadge Art Show is produced annually, along with other pop-up events. Attendance is free. Oct. 6, talmadgeartshow.com The late Neil Simon’s endearing play showcases his brilliant ear for sidesplitting dialogue and his sharp eye for physical comedy. Yet beneath the raucous laughter are two vulnerable people struggling to make sense of their lives. Oct. 23-Nov. 17, northcoastrep.org