At Home With CeCe Durante Bloum

We meet CeCe Durante Bloum in the barn at Newmarket Farm, her show stable and horse training facility between Del Mar and Rancho Santa Fe. Although she was raised in Beverly Hills, the daughter of the beloved entertainer Jimmy Durante and his wife Margaret is far more at home on the farm she founded nearly 30 years ago. She is warm and friendly, with a heart as big as a St. Bernard. Not only does Bloum love horses, she is also passionate about dogs. Five years ago, she and fellow equestrian Georgia Spogli, along with friends in the horse community, founded Thrive Animal Rescue, a nonprofit whose mission is to save abandoned dogs from shelter life and to find them forever homes. 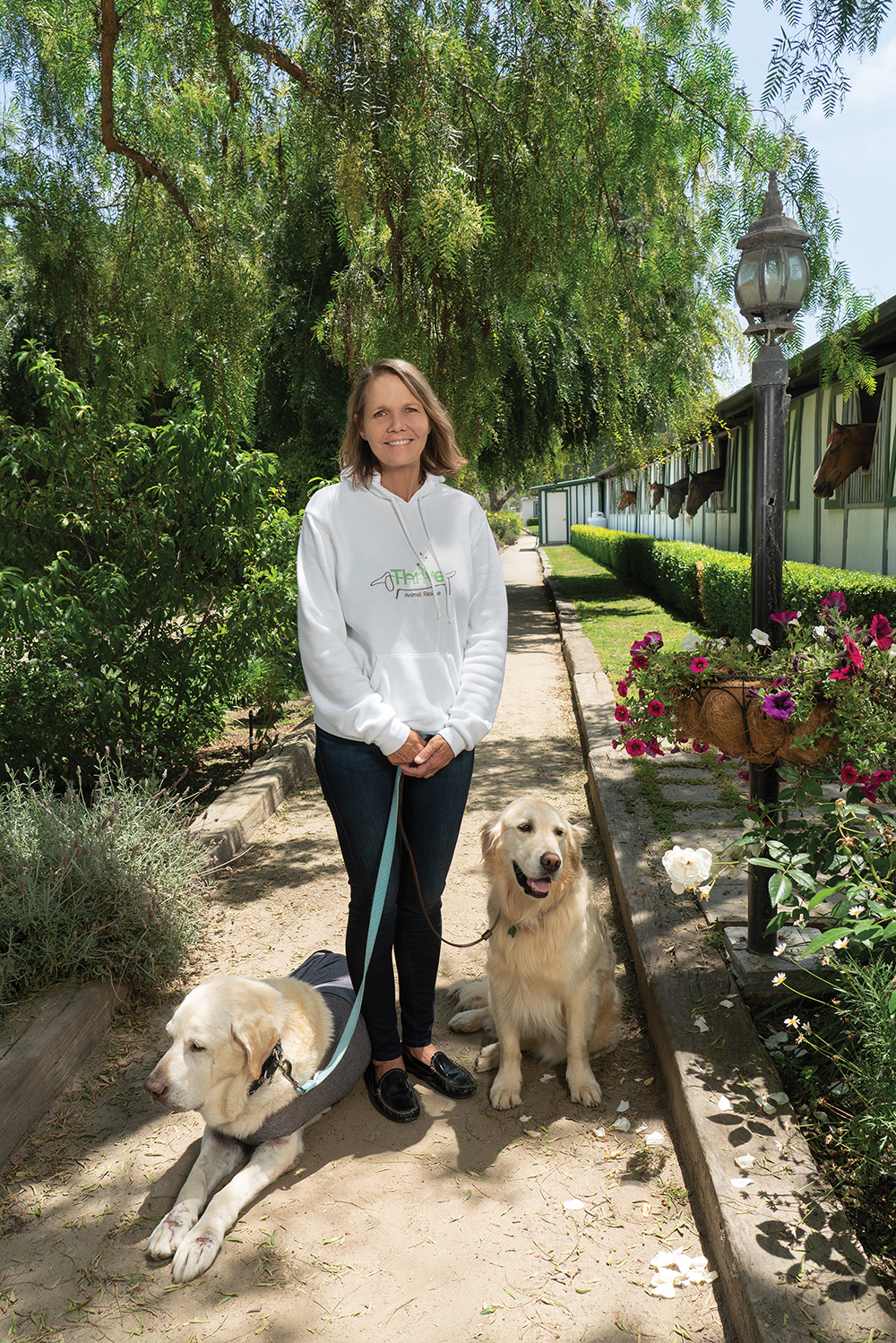 CeCe Durante Bloum with Hef and Bo at home at Newmark Farm, where she boards and trains horses, and cares for rescue dogs through the nonprofit Thrive Animal Rescue

One example is Kymama, a pregnant dog recently dumped outside a Riverside shelter. Thrive rescued the Shepherd mix and her nine puppies when they were just ten hours old. During our visit, their baby nurse, Coco Worrell, was bottle feeding the hungry pups around the clock. Kymama’s story has a happy ending. Worrell adopted the dog, and the pups will be ready for adoption this month. CeCe Bloum (at far right) with staff of the nonprofit Thrive, which finds forever homes for abandoned dogs

Thrive assists families looking for pets, combing shelters for a suitable match based on the needs of both the dogs and potential owners, who fill out extensive questionnaires: What kind of dog would you like? What is your home environment? How many children live there? What are your work hours? How many hours a day will your dog be home alone? Who will care for your dog when the family is on vacation? After adoption, Thrive offers such support services as training, day care, and a wellness center. It also finances a “forever foster program,” paying medical costs for hard-to-adopt older dogs placed in homes. The arrangements work both ways. “Who rescued who?” is Thrive’s slogan. “Dogs help people as much as the people help dogs,” says Bloum.

There was a connection with dogs and horses even as a young child. She used to round up neighborhood dogs and bring them home, or disappear to the Beverly Hills pet store to play with the animals. (The owner would call her parents to let them know she was there.) She says her parents were supportive of her passions, taking her on countless pony rides at Beverly Park, a small amusement park which is now the site of the Beverly Center shopping mall. Later, the Durantes encouraged her pursuits as an equestrian and trainer. The 12-acre property includes a pool (where the dogs like to swim), water slides, and entertainment areas

The family also had an early connection with Del Mar, where the Durantes were frequent visitors to the race track, and where they rented a beach house for decades. Bloum recalls their neighbor, the band leader and entertainer Desi Arnaz, yelling, “Babalu,” his signature song on the television series I Love Lucy, from the balcony of the beach house he shared with his second wife, Edie, as Bloum was on the beach below, enjoying a campfire with her childhood friends — Arnaz’s kids “Little Lucy” and “Little Desi,” and Cindy Barnes, who would later marry the famed jockey Willy Shoemaker.

Bloum had a successful career as an amateur rider on both the West and East Coasts before turning pro and establishing Newmarket Farm with her husband, Stephen. Besides running the 12-acre farm, where they board as many as 75 horses, the couple also fixes and flips houses. Stephen, a contractor, remodeled their own home, a former ranch house. Intimate Living Interiors designed the furniture including couches “oversized for comfort,” says CeCe, where the family lounges with their five dogs and three grown children. Doug Dolezal provided the interior design, including lighting and finishes. Above the concrete-and-limestone fireplace is a painting of a two-year-old CeCe with her parents, who first met at New York’s famed Copacabana, where her mother was a hatcheck/cigarette girl. They married many years later and adopted CeCe on Christmas Day in 1961. Danny Thomas was CeCe’s godfather. Bing Crosby, Milton Berle, and other entertainers were frequent house guests. “When you’re a kid,” she recalls with a smile, “you think that’s normal.” 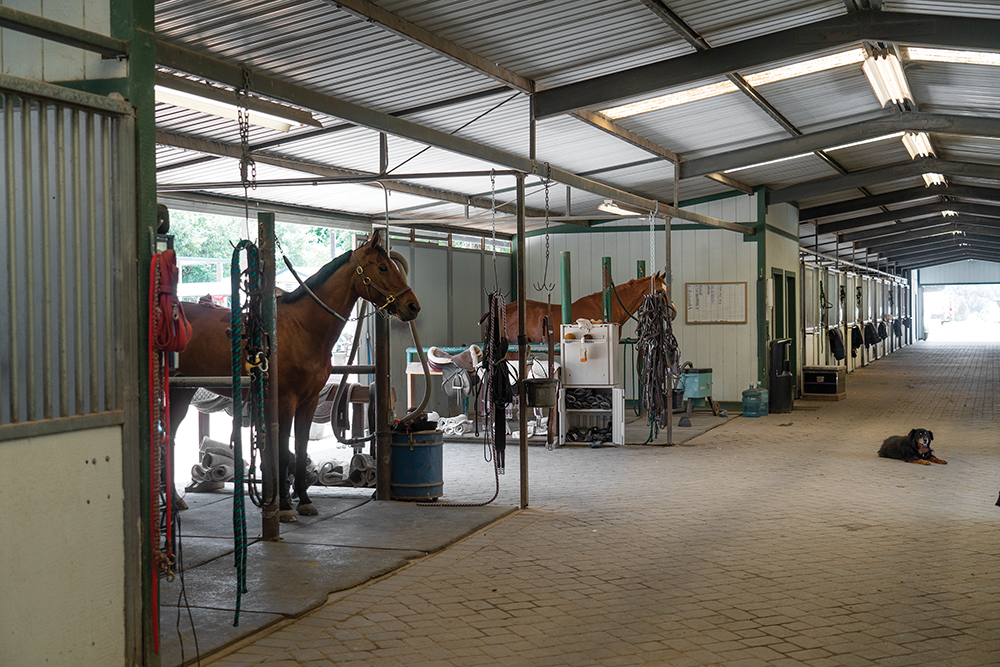 Horses are boarded and trained at North County’s Newmarket Farm

In the corner of the Bloums’ living room is her father’s treasured Hardman, Peck & Co. piano and a small bust of the entertainer inscribed with “Inka Dinka Doo,” the iconic tune which Durante composed in 1933 that later became his theme song. A large coffee table holds more family mementos, including a bound volume of John F. Kennedy’s presidential papers personally signed by Jacqueline and four more late members of the Kennedy family. There are also framed photos: Durante with presidents Kennedy, Nixon, and Ford, and a remarkable shot featuring a legendary group of Hollywood stars including Durante, Clark Gable, Judy Garland, Katherine Hepburn, Frank Sinatra, Spencer Tracy, and Lassie, which CeCe found in the garage after her mother passed away. The focal point of the expansive living room is a painting over the fireplace of two-year-old CeCe with her parents, Margaret and Jimmy Durante. His piano is in the foreground

Now, far from the glitz of Tinseltown, CeCe has built a rich life centering on family, horses, and her rescue work with Thrive. So, the welcome mat outside the family’s front door is especially apropos. It reads, “Money can buy a lot of things, but it doesn’t wiggle its butt when you come in the door.” 858.229.4972, thriveanimalrescue.com   Andrea Naversen