At Home With The Gleesons It is Christmas “California-Style” at Brent and Nicole Gleeson’s home in Rancho Santa Fe’s Cielo. While not exactly a white Christmas, given the sunny, 70-plus degree weather, the home’s interior is bedecked in a festive white-and-green palette. In the foyer, the holiday tree twinkles with white lights and ribbon, favorite family ornaments, and for an organic touch, magnolias and lemons. The dining room table is set for company with a long runner composed of succulents, candles, crystal, and silver reindeer. Garlands, fashioned from a mix of both faux and real botanicals including fresh-cut eucalyptus, deck the halls. And of course, white stockings, personalized with the names of the family of five including the Gleesons’ three children, are hung by the chimney with care in the formal living room, which Nicole says was given its bold look by Brittany Pearson Designs. The merry scene could be straight out of a classic Christmas movie: the Gleesons’ two youngest children are giggling and running about (their older brother “escaped” upstairs), dogs are barking, and holiday music is playing. Meanwhile, Ranch & Coast photographer Vincent Knakal is trying to get the perfect shots amid the controlled pandemonium. After many attempts, he captures a family photo worthy of a Christmas card — no easy task given rambunctious children. Later, during a lull in all the action, Brent grows contemplative. “Parenting is so much more complicated than combat,” he says. “We’re very aware of how lucky we are.” Gabby, an Australian Shepherd, relaxes by the tree in the festive foyer

A former Navy SEAL and combat veteran, Brent did several tours in Iraq and Africa.  He was a member of SEAL Team Five, the first elite special operations force sent to Iraq after 9/11, taking part in what he calls “high tempo” missions. Brent is reluctant to offer further details, protective of his band of brothers, but at one point he grows emotional remembering the losses suffered.

Brent has turned what he learned on the battlefield to business, becoming an author, entrepreneur, and speaker on topics that range from transforming companies to building high performance teams. He and Nicole are the co-founders of TakingPoint Leadership, a management and consulting firm that draws its name from the military term that means “man in front,” assuming the first, most exposed position in a combat formation. Clients have included Delta Air Lines, Google, Bank of America, Lilly, Boeing, Toronto Raptors, General Mills, and the Young Presidents’ Organization. Named one of the “Top 10 CEOs” by Entrepreneur Magazine in 2013, Brent is also the best-selling author of Taking Point, A Navy SEAL’s 10 Fail-Safe Principles for Leading Through Change. Nicole, a former sales and marketing executive, leads the company’s strategic planning, new business initiatives, and Women TakingPoint, a division that focuses on the future of female leadership in the workplace.

The Gleesons are committed to the SEAL Family Foundation, the San Diego-based nonprofit that provides services and support to the families of active and fallen naval special warfare operators. The couple has co-chaired the organization’s annual galas. Brent continues to serve on the foundation’s executive board and mentors young men going through SEAL training. The kitchen dining area, decorated with garlands of greenery (both real and faux), opens onto an expansive terrace

They have also served as a March of Dimes “Ambassador Family” because of a deeply personal experience. Their five-year-old daughter, Parker Rose, was born with a severe birth defect, spending a month in the NICU at UC San Diego. She underwent two surgeries, one immediately after birth and another just a year later at Rady Children’s Hospital. The Gleesons have shared their story, helping the March of Dimes in its efforts to give babies a healthy start in life through research, programs, and education. “Having healthy children is such a blessing,” Nicole reflects.

Despite their challenges, the Gleesons have persevered, grateful for all they have. They aren’t dreaming of a white Christmas, they already have it, not only in their festive home, but in their hearts this season. 619.606.5155, takingpointleadership.com   Andrea Naversen 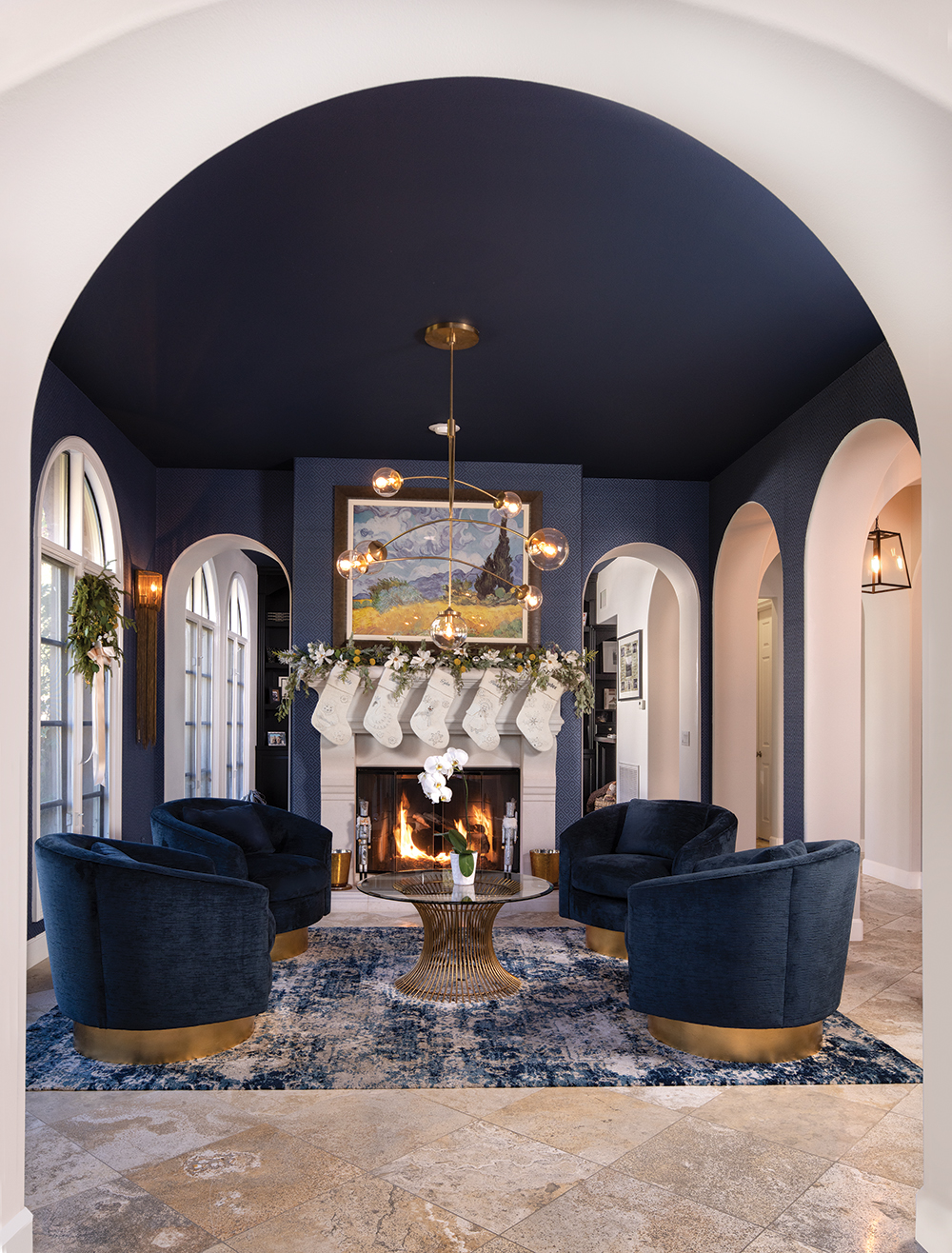 The fireplace in the chic living room is hung with family stockings. Nicole credits Brittany Pearson Designs with the room’s bold look

Andrea Naversen At Home With