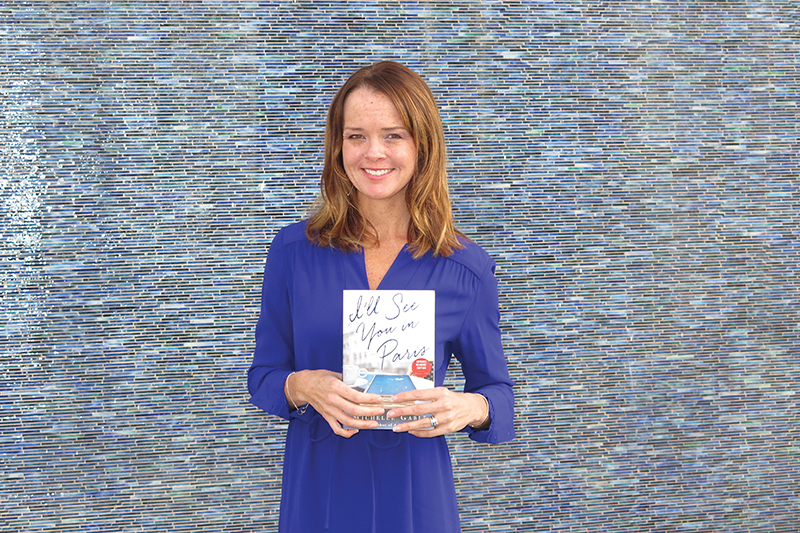 Cardiff resident Michelle Gable has enjoyed tremendous success with her debut novel, A Paris Apartment. The finance exec-cum-bestselling author talks to Ranch & Coast as she prepares for the release of her follow up novel, I’ll See You In Paris, on February 9 Ever since she was about ten years old, Michelle Gable has been writing. Not necessarily with the goal of penning a bestseller, but more as a means of escape. (“Unless you were my parents or my very best friend, you didn’t know. Even my kids didn’t know!” Gable laughs.) But now, her pastime is no longer simply a private creative outlet. Gable’s debut novel, A Paris Apartment, was released in April 2014, achieved the coveted bestseller status on numerous lists, including The New York Times and USA Today, and is now published in multiple languages globally. Now a bona fide author, Gable is on contract to release a book every year through 2019, and has even sold movie rights for A Paris Apartment.

Her second novel, I’ll See You In Paris, is a work of historical fiction centered around a bereft woman who’s recently lost her fiancé in the Vietnam War. She sees an opportunity to heal her emotional wounds by replying to a “help needed” posting for an older, cultured woman in England whose only requirements are a love of literature and the English countryside — who turns out to be more of a crazy recluse than a sweet grandmotherly-type. The older, cultured woman is Gladys Deacon, Duchess of Marlborough, an actual person Gable discovered while researching A Paris Apartment whom she found fascinating and subsequently inspired the idea of ISYIP. She now calls Deacon among her favorite characters of all of the books she written, published and unpublished, for her intelligence, vivacity, and gumption. However, Gable says the fictional characters in her third book are her true favorites thus far, even tempting her to the point of not being ready to quite say goodbye. “I never thought I’d want to write a sequel because I don’t like to read sequels, and I like to write the kind of stuff I read, but after my third book I thought, ‘I don’t want to be done with these characters. I like them too much!’”

For I’ll See You In Paris, Gable chose to give a nod to Virginia, with one of the main characters hailing from the state, where Gable attended The College of William & Mary.

But does the native San Diegan see a novel set in her hometown sometime in the future? “I would like to set something in San Diego because — it’s funny — there aren’t many books set here. I do love this city and it’s such an interesting place.”

Gable is honest about the differences between releasing a first and second novel and the pressures that come with being a seasoned author. “For the first book, I had no expectations. My publisher had no expectations. I funded all the marketing out of my own pocket,” she says. “This time, they’re putting me on a multi-city tour. Now there are expectations.” She admits the pressure is mostly self-imposed (“You want to just keep doing better”), though now there are more people to please than just the publishers. “A Paris Apartment has done really well, so [there’s] that built-in fan base, which is phenomenal, but then you worry about how people are going to respond. I think I’ll See You In Paris is a better book, but sometimes people respond to things in different ways for different reasons that aren’t tangible,” she says.

Speaking of fans, there are a lot of them, and they include everyone from a random Italian man who sends photos of himself holding her book (!) to supermodel Cindy Crawford. Last year, when Crawford tweeted that A Paris Apartment was a “great vacation read,” a shocked Gable, who thought the book would “sell about 50 copies, and it would be all to my mom’s friends,” says her first reaction was, “Does she know my mom?”

Learning to embrace her new life as a successful, published novelist, she cites receiving her first advanced readers copy of A Paris Apartment as the first of many “pinch me” moments that continue to today, from receiving daily fan mail (“It’s still so weird to me!”) to making appearances at ticketed events, where’s she’s still surprised and flattered people will pay to see her. Aside from that, she says, “It hasn’t really changed life, other than my occupation on my tax returns.” Her busy schedule keeps her from getting too caught up in the magnitude of her accomplishments; when she signed her contract for books four and five, instead of popping Champagne, she was hopping on a conference call for her job as VP of Investor Relations at finance giant Ellie Mae. Having kids also keeps her feet firmly planted on the ground. When one of her daughters asked Gable if she was famous, her other daughter sagely replied, “She’s a little bit famous to people she already knows.”

The “little bit famous” Gable will launch the release of I’ll See You In Paris at Warwick’s La Jolla, Tuesday, February 9, at 7:30pm, before heading out on her national book tour. For more information, visit warwicks.com.

Favorite local restaurant: Zenbu (in Cardiff). They have a good happy hour and we can take the kids and get good sushi.
Favorite label to wear: I like to mix it up, but I like LK Bennett. And Kate Spade always has cute dresses.
On a typical Saturday, you’ll find me: At the softball field.
The one thing I can’t live without is: Coffee or Diet Coke.
Right now I’m reading: In Falling Snow, by Mary-Rose MacColl. It’s SO good.
My biggest supporters are: My parents and my best friend from junior high.
Ten years from today, I’ll be: Hopefully still writing. I just want to get better with every book. I want to be doing this exact thing ten years from now.