Ukulele Sensation Jake Shimabukuro at The California Center for the Arts, Escondido Ukulele virtuoso Jake Shimabukuro will wow audiences as part of The California Center for the Arts, Escondido’s 20th Anniversary 2014/2015 season with a special Halloween show on Friday, October 31, at 7:30pm, in the Concert Hall. Redefining a previously under-the-radar instrument, the critically acclaimed slinger combines elements of jazz, blues, funk, rock, bluegrass, folk, and flamenco, fully revealing his musical dexterity. Shimabukuro has appeared on television shows including Late Night with Conan O’Brien and Jimmy Kimmel Live, he’s earned notable fans such as Eddie Vedder and Sanjay Gupta, and performed for the likes of the Queen of England.

Well known in his native Hawaii and Japan during his early career as a member of Pure Heart and Colón, Shimabukuro earned international fame in 2006 when his singular cover of George Harrison’s “While My Guitar Gently Weeps” went viral online. The video became one of the first hits on YouTube, and has since received over 13 million views. The artist’s career has skyrocketed from his humble beginnings at a local Honolulu café, with Shimabukuro receiving collaboration requests from notable musicians across many genres. He has toured with the likes of Jimmy Buffet & The Coral Reefer Band and Béla Fleck & the Flecktones across the globe in Japan, Canada, Brazil, and Australia. Shimabukuro has also performed as a guest artist on Ziggy Marley’s Grammy Award-winning Love is My Religion (2006) and Yo-Yo Ma’s 2008 holiday album, Songs of Joy and Peace. Now, he’s exploring his passion as a film composer, contributing to the soundtrack of the Buffett-produced film Hoot, scoring the hit Japanese independent film Hula Girls, and recently completing the score for the Japanese version of the film Sideways.

An award-winning documentary on his life, career, and music, Jake Shimabukuro: Life on Four Strings, was released in 2012. Airing nationally on PBS and winning the Gotham Film Audience Award, the project is a compelling portrait of the musician whose virtuosity has transformed all previous conceptions of the ukulele’s potential. On the road from New York to Los Angeles to Japan, Jake Shimabukuro: Life on Four Strings reveals life on tour, the exhilaration of performance, and the wonder of newfound fame through intimate conversations with Shimabukuro. (800.988.4253. www.artcenter.org) 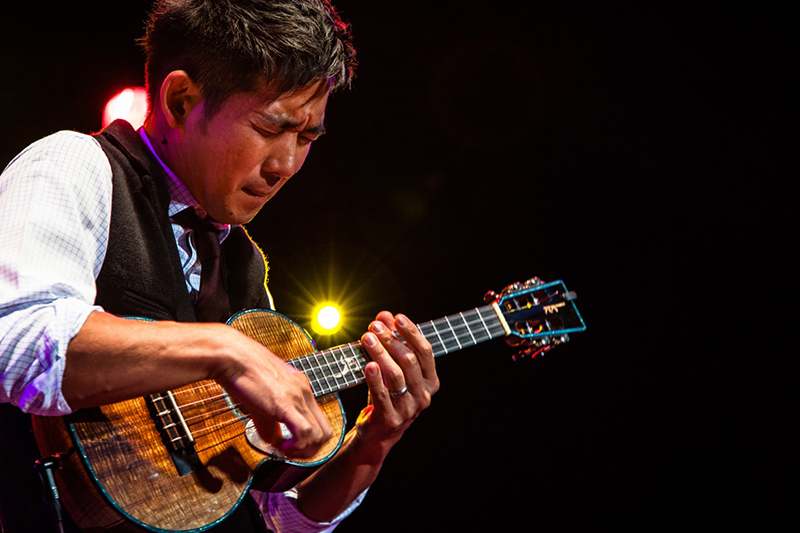